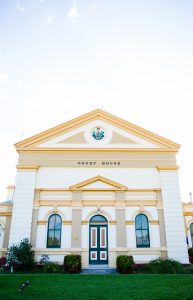 Boorowa was gazetted as a town in 1850 and The Court of Sessions in Boorowa was proclaimed on October 1, 1855.

The first Court of Petty Sessions hearings in Boorowa were conducted from 1856 in cramped rented premises at the Crown Inn. The clerk travelled from Binalong to preside.

The first basic courthouse structure also served as a police lock up and was built in 1857 at the rear of the present courthouse.

A more authentic courthouse was constructed three years later after local lobbying. The project cost £800, was located adjacent to the lockup and to prevent prisoners from talking to members of the public, was fenced for £68 in 1862.

This building had a £150 addition in 1868, with a wing used by the Lands Department.

The first District Court hearing took place in Boorowa in 1866. It is reported that Judge Francis heard 16 cases and afterwards dinner was served at the Royal Hotel (the Ram and Stallion) in the “richest style”.

Licencing Court hearings followed from 1882. The increase in court sittings combined with the building’s age led to approval for a new construction in 1883. The court moved to rented premises and tenders were called in 1885 for stables (part of which remain at the rear of the old police residence).

The new grand building was designed by the Colonial Architect James Barnet and was one of 130 court houses built during Barnet’s 25-year tenure. Barnet was known for a classical revival style which incorporated Palladian elements in its composition. Among impressive buildings designed under his guidance is the General Post Office in Martin Place, Sydney.

The Boorowa Court House cost £5,750 at time of construction in 1885/86 and was the last of a series of structures that housed court proceedings in the town.

This courthouse was completed by January 1886 and had many upgrades over the years. Electricity was installed in 1926 and there was a $30,000 refurbishment in 1984. Court sittings in Boorowa ceased in 1988, but court hearings continued to be held in nearby Yass and Young.

Today the building has been recorded by the National Trust and is leased by Hilltops Council. Visitors are welcomed at the Boorowa Visitor Information Centre and volunteers operate an arts and crafts shop co-operative.