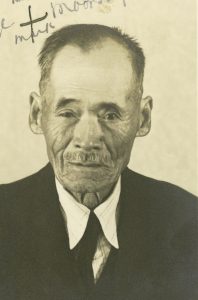 George took great pride in his garden and was a regular exhibitor at the Young District Annual Show, taking out many prizes for his wide variety of vegetables.

He reportedly was supposed to have moved from Wambanumba in 1939 to live on Tommy Young’s property on the Wombat Road but the National Security (Aliens Control) Regulations records show that he changed his address on the 25 November 1943, following a warning from the Aliens Control Board 24th January 1940 for failing to register his change of abode.

George lived in a two room hut at the back of Young’s property, daily he would walk over 200 metres to his garden having to cross a creek on stepping stones and climb through a fence, this he was still doing at age 105. As George aged Mr. Young would keep an eye on him as he worked in his garden for George was a very independent gentleman and would not accept 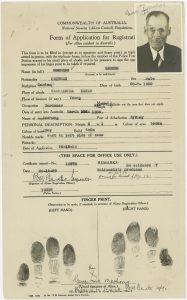 help with his daily activities, caring for himself and tending his garden up to the time of his death. His longevity can be contributed to the fact that he ate hearty meals of rice and meat and no doubt vegetables, he walked where ever he needed to go and just prior to him celebrating his 105th birthday he still walked 3km into town. He was never sick, refused to take medicine and had never seen a doctor or been in hospital. Only in his later years did he suffer from semi-deafness and rheumatism. One of his joys in life was to have a small bet on the horses every now and then.

George a very intelligent man had a cheery nature and was well liked and respected by the people of Young, so much so that he was known as Georgie to everyone.

Life for Georgie came to a sad end. Whilst burning grass to clear land for a vegetable garden his clothes either caught on fire or he was overcome with smoke. His badly burnt body was found by Mr. Tommy Young who, not having seen George working in his garden, went to look for him. The finding at the Inquest held at Young on 15 June 1957 by C M Western, Coroner, was shock following upon severe burns. He is buried in the Church of England portion of Young General Cemetery.

There is some controversy regarding George’s age as the only surviving official records we have show him as been 98 when he died, but George was particular about when he was born therefore his age of 107 at the time of his death was most likely correct.  All his official documents had been destroyed in a fire in Tom Young’s shop in Main Street, the year before his death.

We dips our lid, Georgie.

Hilltops Council would like to acknowledge the Young and District Family History Group and the National Archives for their support in the creation of this article.