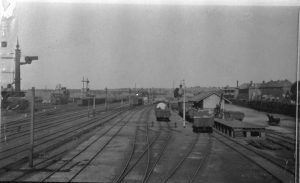 The 29 kilometre single rail line from Murrumburrah to Young was established in 1884 and opened with great fanfare in March 1885.

This new line was part of Colonial Australia’s shift from horse drawn transport like Cobb & Co Coaches to steam railway. This first section of rail from the main Southern line to Young was accomplished just 25 years after the Lambing Flat gold rush.

Contractors O’Rourke and McSharry quoted £184,000 for the construction. The line was launched in grand style, the town elaborately decorated it with triumphal arch, flags, bunting and streamers.

Crowds welcomed the first government train at 9am containing the Balmain Coldstream band. Still under construction at the time, the station was surrounded by spectators and 1000 children, led by the town band, sang the national anthem to the visiting dignitaries.

The next stage of development, the Young to Cowra line was built in 1886 and officially opened in January 1887 with the Cowra to Blayney tracks opening a year later.

Rail played a pivotal role in the life of the town and district, transporting passengers and freight while training and employing a large percentage of the population.

Over the years steam locos made way for diesel and the clatter of trains passing through the centre of town provided a regular rhythm to the lives of generations.

Yet regional train transport waned. From December 1989 the Blayney to Demondrille rail line operated in a reduced capacity with no passenger service until 2011.

Nowadays passenger and freight trains no longer ply the tracks, a once thriving industry has ceased its dominance and the line has fallen into disrepair and disuse. Lobbying by mayors of Councils located along the line has failed to achieve any upgrade or service delivery.

Instead NSW Trains offers a daily bus connection between Young and the main Sydney – Melbourne line at Cootamundra.