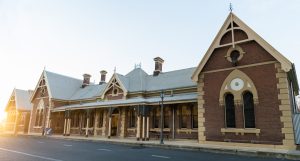 The station was positioned on a flat site formerly occupied by the town’s 1873 brick school building, Temperance and Masonic Halls and Congregational Church.

Gough went on to become a Young Alderman and founding Labor Party politician, serving in the State Legislative Council. Some claim he was the first Australia politician of Aboriginal heritage.

The railway station became the social hub of Young in the early days, with people crowding the platform every evening to welcome the trains. The crush of people drawn by the novelty of rail travel led to a ban on all but passengers using the platform.

Daily, seven trains each way covered terrain to meet the main Sydney to Melbourne line at Harden, and over many decades the station was the central economic and transport hub of the district.

This Gothic inspired building closed on December 15, 1989, operating for just over 100 years.

Now housing the Hilltops Council Young Visitor Information Centre, Hilltops Wine Cellar Door and Burrangong Art Gallery this fine edifice remains one of the most impressive in the town.